The 8 Most Common House Electrical Problems Faced By Homeowners

The most common house electrical problems

If you’re a homeowner, sooner or later be faced with an electrical problem. Electrical issues can range from simple D.I.Y fixes to very complicated ones that require professional help. The following list includes 8 of the most common house electrical problems faced by homeowners, how to spot them, what are the dangers and what you can do to have them fixed.

What is an electrical surge?

A power surge is basically just a huge spike where too much energy hits electronics at once causing all sorts of problems including frying processors on computers as well melting metal and plastic components inside appliances. Most equipment is designed to handle minor variations in their standard nominal operating voltage however, surges can be very damaging. An electrical surge may reach tens of thousands of volts with an amplitude measured in microseconds; they’re usually not harmful but it is important to be aware of their potential effects because it can cause catastrophic damage in some cases!

What causes an electrical surge?

There are several causes for an electrical surge. The main reasons are electrical overload, faulty wiring, lightning strikes and the restoration of power after an outage or blackout which turns all of your electrics back on again at once.

The best way you can protect yourself against these types of storms though would just be installing a good quality surge protector into any electronic devices that use electricity for operation (like computers).

What damage can a power surge do? Can I do anything to prevent this?

The majority of the time, though they’re actually quite harmless. A brief uptick in your home’s electricity level will either be too low for you to notice or it’ll get absorbed by appliances like surge protectors and other devices scattered around. However, if surges become too much, they can fry frying processors on computers as well melt metal and plastic components inside appliances. It is wise to unplug appliances during a storm,  ensure that you have surge protectors on EVERYTHING in your house as well as getting insurance that covered power surges.

A Sag is a term for a dip in power supply voltage that can last anywhere from seconds to minutes. A surge, on the other hand, occurs when there’s an increase above recommended level and will generally only happen once or twice before returning back down again without any lasting effects.

What Causes These Sags & Dips?

There are many causes of voltage sags that can be caused by weather or internal system issues. The most common external factors include thunderstorms, lightning strikes on power lines which create ground faults in wide areas leading to temporary interruptions across the globe. Internal causes may also arise such as starting major loads being added into your system along with grounding or wiring problems occurring within your home.

What Damage Can A Voltage Sag Or Dip Do? Are There Any Solutions?

A voltage dip also referred to as voltage sag, can cause equipment such as electronics and other sensitive devices connected to the grid some problems. Generally, power surges do more damage than dips but damage can still occur because of voltage sag or dip. The solution to prevent voltage sags or dips can get rather complex. It involves having another power supply along with making sure no electrical wiring or an electrical fixture is causing problems in the home. If you’re concerned, speak to a qualified electrician in your area.

3. Light Switches Are Not Working

As you move into a new house, it is important that all of your lights work properly because a very common house electrical problem is light switches not working properly. If there are dimmer switches in the room and none seem to adjust anything at all, this could mean one thing: either shoddy workmanship or sub-standard products were used for construction (this assumed the dimmer switch is not very old!). You might also want to check with an electrician before assuming anything about what might be wrong – sometimes outlets don’t activate when we think they should and circuits may no longer carry enough power from the switchboard due to damage over time. When in doubt – contact a licensed Electrician.

4. The Power Is “Tripping” Frequently

Your “power tripping” is known as a circuit breaker “trip” and this shuts off the electrical flow in order to protect the system from overheating. It’s a safeguard that helps prevent fires and damages, but it also alerts you when something goes wrong so there are no accidents!

Visually monitoring your power consumption can help save you money and time. When appliances or devices start tripping the circuit breaker, move them to different circuits until it’s safe for them to be used again on that same switch! If a fuse repeatedly blows as well then this might not just indicate an issue with how much energy is being consumed within one particular region of your house but rather may point towards some larger problem such as insufficient wiring capacity which would require professional assistance from qualified electricians in order restore service efficiently.

If your circuit breaker keeps tripping – the smart move would be to get a professional electrician out to investigate.

5. The Circuits Are Being Overloaded

Circuits being overloaded is one of the common house electrical problems that people deal with regularly but “what is a circuit overload” I hear you asking. Well, I’ll tell you. So A circuit is comprised of wiring, a breaker or fuse, and the electric devices you want to use (such as a hairdryer, lighting, or a vacuum). Each device uses a certain amount of electricity when it’s operating, adding to the total load on the circuit, but when you try to use more electricity than your circuit is made for, you get a circuit overload. When there’s a circuit overload, the breaker will trip and cut off electricity. This is an excellent way to prevent house fires from happening! This should not be happening regularly so if it is please check that you’re not doing the following:

If you’re not doing any of the above and your electricity is cutting out – it’s time to call in a professional electrician. 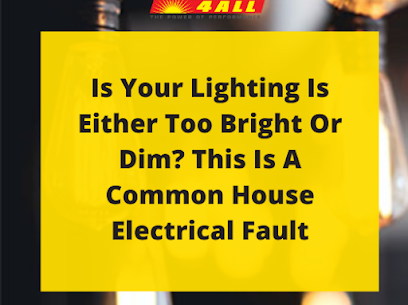 6. Lighting Is Either Too Bright Or Dim

Lights not performing like expected by either being too bright or dim is one of the most common house electrical problems. If this is occurring, there are two probable causes – a difference in globes or because of a bad main neutral connection.

The first step to determine the reason for this difference is to check the globes and compare them to the other locations in the house. Are they identical? If not, then it is likely this difference in light is just a feature of the globe being used because different types of lights with different wattage are be being used. However, if you have checked the globes and found that they are indeed the same then this may be due to a bad main neutral connection.

Do not try and fix this yourself. This is an electrical issue that will continue and may cause other problems in the house until it is fixed by a professional.

Shocks from touching electrical outlets or from small appliances in the home rarely cause serious injury however it is a nasty experience and the potential danger level from an electrical shock should not be understated. Most electric shocks are usually very mild (similar to a static shock you’ve experienced before) and commonly occur when turning appliances on or off. The reason for this shock could be because of your electrical appliances or it might be because of faulty wiring that needs fixing before anyone else gets shocked again! You can check if a faulty appliance is to blame by plugging another device into your house’s electric socket and seeing if there’s an identical result each time – if there is then you can be confident it’s because of the wiring and not the appliance. Remember, testing this yourself means you’re exposing yourself to another potential shock so be careful and, if in doubt, contact an expert electrician who offers an electrical service for testing this.

8. Light Bulbs Are Burning Out Too Fast

The burning out of a light bulb can be due to a number or combination of reasons, such as wiring on the circuit itself being bad and causing too much wattage from one switch; insulation getting close enough where there’s the voltage at night even when off-site lighting fixtures don’t supply any power. If you notice flickering in your lights then this would likely be because of a poor connection on the circuit.

As you can see, light bulbs burning out too often can occur for a number of reasons but isolating the issue and finding out “why” this is happening can be tricky for non-professionals. If you’re going through light bulbs like it’s nobody’s business, or if your lights are flickering on and off without warning then I recommend reaching out to an electrician who will help identify what might have caused this problem in order to get resolved as soon as possible!

What To Do If You Notice These Problems?

Electrical problems can lead to safety hazards so if you’re unable to fix these yourself (most you won’t be able to) get in touch with an experienced professional as soon as possible! If you’re based in Albany, Western Australia then reach out to Power 4 All – the best people for Electrical Albany has to offer.

SPEAK TO THE TEAM
FOR YOUR FREE QUOTE

Please fill out the form below to speak to one of our team via. email.
We're ready to help and will answer you shortly.